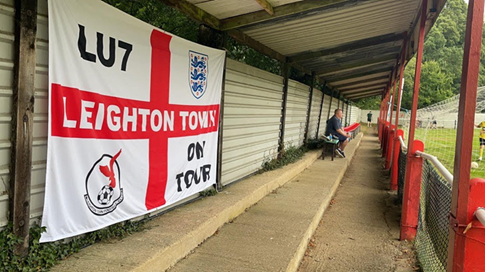 With Leighton Town out of the FA Cup, there’s no midweek fixture. So, how better to spend the time than to look back at the last two games? Here is a sweeping round-up of Leighton Town’s visits to Leverstock Green and Tring Athletic.

Town were on the rebound after that weekend’s disappointing home defeat to Harpenden. The top of table clash saw Leighton slip down to second, but now there was a chance Sweeney’s men could climb back to the summit of the Spartan.

That climb to the top would certainly look more daunting when inside the first half an hour, the home side defied the odds and took the lead. It was a shot from the edge of the box after a timid Leighton clearance. Struck with just enough venom, it evaded goalkeeper Connor Coulson in his top left corner.

In a dismal half of football for the visitors, Leverstock were at it again just before the break. A ball over the top wasn’t dealt with and the Green’s striker did well to get to the ball before Coulson who had come out. The touch looped over the young keeper, and the striker had a comfortable tap in.

There were clearly some strong words at half time, as the away team came out with guns blazing. Early second half pressure saw Tom Silford pull a goal back on the 51st minute. Remarkably, 15 minutes later, half time substitute Ross Adams drew the visitors level after clever wing play by Ashton Campbell. Now, from an abysmal start – a game of football had broken out as Town grew into the game.

The third goal always felt like it was coming, it was just a matter of when. 71 minutes in, Danny Webb’s effort should’ve been a warning sign, as he forced a smart save out of the home keeper. A keeper who was more than happy to play for a draw too, it was a joyous occasion when he had finally conceded a third as Ashton Campbell added to his assist earlier on.

82 minutes in, Tom Silford floated in a delightful cross and Campbell was there – nodding expertly past the flailing goalkeeper. It was a truly great finish for Leighton Town and capped a great display of determination and teamwork – things that have slowly become synonymous with Joe Sweeney’s team. Travelling fans were also gifted with one of the longest knee slides on record by Town defender Joe Fitzgerald in the goal celebrations…

The last time Leighton Town played Tring, Danny Webb struck an internet famous free kick. Although this result didn’t have the same viral proportions, fans would’ve been happy with the 0-4 victory away from home.

Leighton started the game emphatically at the Grass Roots Stadium, as inside the first minute, Ashton Campbell opened the scoring. After latching onto a ball over the top, the forward smartly lifted the ball over the keeper and tapped into the empty net.

After this early start, Leighton looked in control. Before the half was out, the visitors could’ve added more to their one goal lead as they continued to carve out chances. Great build up play on 27 minutes saw the final ball just awry. Six minutes later, a smart one-two between Campbell and Luke Dunstan saw the forward who had already bagged once, break away from his man. His shot just went wide and Tring could finally catch their breath at the break.

The first exchanges of the second period offered little to report for both sides, as Tring seemed to rise to Leighton’s challenge. Perhaps they’d risen a notch too far, as in the 61st minute the home side saw red. Ollie Buttler saw his afternoon end prematurely with a late tackle on Town midfielder Jordan Frederick.

On 72’, Alfie Osborne made way for David Parkinson – giving the visitors more attacking impetus. On 78 minutes, Town forced the Tring keeper into a smart save. A counterattack was driven by Campbell. The cut back from Webb led to Oran Swales finding the bottom corner, only to be denied by the scrambling goalkeeper.

After holding the narrow lead for so long, Town finally had another goal 83 minutes in. Substitute Parkinson put Webb through on goal and the fan favourite dispatched his effort well. This second goal seemed to open the flood gates and the third goal wasn’t too far behind. Minutes later Campbell got his double and then capped an emphatic hattrick to end Leighton’s day with a brilliant 4 goal deficit.

After these two exciting fixtures and a break in the midweek, Leighton Town return to action this Saturday. Away again, they travel to midtable Arlesey Town – looking to add another win to the column and stay top of the league.