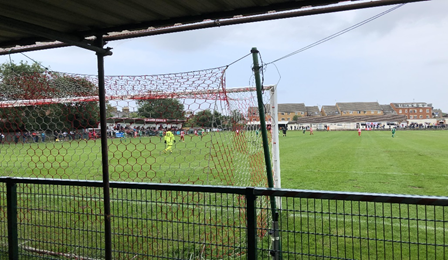 Last Tuesday, Leighton Town played out a gritty 1-1 against Ardley United. In a match up where either side prevailed, this midweek league meeting in Oxfordshire was characterised by fouls, sin bins and even saw a red card. Town’s goal came from the spot and Danny Webb. As the official Ardley match report stated, sometimes it feels 90 minutes just isn’t long enough…

The club have provided an excellent in-depth report which you can read here: https://www.ardleyunitedfc.co.uk/Matchreport.aspx?id=531448

But now… to the main event and Saturday’s action

Before the two sides met at Bell Close, the form was similar. Any reasonable Town fan would’ve been readying themselves for another battle (like in the midweek fixture). Well, that couldn’t be further from the truth as Leighton ran out rampant winners 7-1 in a truly enjoyable football match.

Leighton started as they meaned to go on. Early on, some great wing play by rising fan favourite Andrew ‘Bullet’ Parkinson led to the Holmer Green defence being at sixes and sevens. Parkinson took the defender for a nice run before the ball-in cannoned off the helpless onlooker to open the scoring with an own goal just inside the first minute.

Town looked relatively in control, although the away team were determined not to let the game slip away from them, creating a chance too inside 15 minutes. Debatably Holmer Green’s best player, striker Jethro Odomusu came close – forcing a good save from Connor Coulson in the Town net. Things took a bad turn for Leighton as star man Danny Webb took a hard fall, while rumoured he was already strapped up for another injury – he had to make way on the 16th minute mark.

Regardless, this didn’t halt Town’s push for another goal. Minutes after Webb’s withdrawal, the Holmer keeper was forced into a fine double save from a set piece. After this, in the 29th minute more great play from Leighton saw a shot from James Towell just go wide of the mark. It wouldn’t be long before the men in red and white doubled their lead though.

Following a routine stop by Coulson, the young keeper picked up the ball and launched a pinpoint ball up to striker Ashton Campbell. The big man up top brought the long ball down with ease on his thigh and didn’t hesitate to unleash a thunderous right foot volley across the keeper into the left side netting. A stunning finish on the 32nd minute – it delighted the home crowd, impressing even the away fans that were part of the collective 317 in attendance.

And it would be those away fans that would have the next cheer, as Holmer Green got one back on 41 minutes. This goal back offered the visitors a foothold in this game, but Leighton were ready to kick those metaphorical feet from under The Greens. Just two minutes later Parkinson was there for his second of the game, with a composed half volley just before the break.

With it being 3-1 at half time, many around Bell Close were more than ready to get back into the action. That obviously includes Sweeney’s men – who did not mess around continuing their first half fortunes. Five minutes into the second half, Tom Silford crossed in for Town from a free kick and Ethan Flanagan was there to tap in front of the roaring Shed End.

5-1 wasn’t far away for Leighton, as the away side looked dejected. Unable to deal with the constant pressure – Holmer Green were utterly undone. The next goal was true to that statement as a ball slotted from the midfield found the onrushing James Towell. In what felt like an age, Towell composed himself and delightfully dinked the keeper who could only watch as the ball floated into the back of the net on 55’.

This sublime bit of skill would be Towell’s last real influence on the game as he made way on 58 minutes. He was part of a double substitution that saw both him and goal creator Silford replaced by Tom Bryant and Ollie Cox. Later, on 71 minutes Cox would be directly involved in the sixth Town goal of the afternoon. Winning the ball back in the Holmer half – he offloaded to Parkinson who put a top ball over the defence to Campbell who coolly slotted past the keeper.

On 90’ it would be the other way round as Campbell returned the favour – feeding Bullet who, in the words of the ecstatic club twitter “sat both the defender and the keeper down for Leighton’s 7th”. It was a complete and dominant display from Leighton Town and will have surely sent shockwaves around the league. Now, focus will shift to the Bedfordshire Derby – as Dunstable pay a visit in midweek.