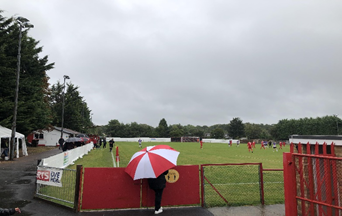 Leighton Town picked themselves up and drove on from last week’s away defeat to Arlesey Town by beating Flackwell Heath 1-2 on Saturday. Coming from behind again, Leighton put on an impressive, determined display in the Buckinghamshire rain to continue as table toppers in the Spartan South Midlands Football League.

In the abysmal weather, the hosts looked to find a foothold in the game. The first effort from Flackwell was a Jack Taylor strike from 25-yards three minutes in. It was an ambitious attempt but skimmed along the turf – comfortably wide of Connor Coulson’s goal. Another Taylor shot from range would force the travelling keeper into a smart stop on the 10-minute mark.

Town tried to respond with Danny Webb but his header from a floating Joe Fitzgerald cross glanced wide. Flackwell then made good on their early pressure, taking the lead 19 minutes in with an impressive goal. Adam Thomas darted down the left and cut in smartly before hitting a rasping shot into the top right corner from outside the box. Coulson got a hand to the ball but was beaten all ends up.

In yet another fixture, Leighton had conceded first. The spirits weren’t dampened though, and they carried on pressing the home side’s box. A couple of chances from set pieces saw some admittedly ragged defending from the Heathens with Leighton’s confidence high. However, when midfield enforcer Jordan Frederick stopped a Flackwell break, it was deemed perhaps too enthusiastic as he went into the book on the half hour mark for his industrious shirt pulling efforts.

On 34 minutes, Leighton had a free kick on the left of the box. There was a scramble in the box before the ball broke to an unmarked Ethan Flanagan. The defender stuck out his boot and poked home past the stray Jonathan O’Sullivan in the Flackwell goal. The goal looked to be judged offside, but the ref conferred with the linesman before pointing to the centre circle and blowing his whistle to confirm the overturned decision.

The away side were now in the ascendency and on 37 minutes, home midfielder Alan Akerman picked up a booking. Just before half time, Town surged forward again – winning a corner. Said corner was put in and bounced through the bodies in the area, before it was that man again Ethan Flanagan, in the right place at the right time. He swung at the ball, flicking it over his shoulder high into the roof of the net taking Leighton Town into the break with a deserved lead.

The second half opened in a similar vein to play in the first, especially bitty and competitive in the centre of the park. That said though, as the Flackwell Twitter described it 56 minutes in – it was an ‘up and down start to the second half with no real chances created.’ Seemingly, it would continue as such.

Inside 63 minutes, a ball from Ashton Campbell for the sprinting Danny Webb was intercepted by the hand of defender Mo Ceesay. Tom Silford fluffed the free kick under the wall, presenting an easy shot to collect for O’Sullivan.

Five minutes later, Leighton made their second change. Silford made way for Ross Adams as the visitors looked to see out the result in the final 20 minutes. Flackwell Heath mustered many half chances, and their second half performance was probably summed up by the wing play of Simeon Weekes – he turned well but his cross was miscued and out tamely for a goal kick.

That said, as fans were winding down – a final crescendo of action broke out. In the 83rd minute, goal scorer Adam Thomas was after his second. Smashing his shot from the right side, it took great reactions from Leighton Town’s Coulston to parry. The ball came out but Sanchez Parkes couldn’t readjust to tap it home.

After this sequence, it was all about game management for Sweeney’s men and keeping the ball at the right end of the pitch. Two short corners saw the minutes tick by as Ashton Campbell shielded the ball until the final whistle sounded. It was a vital three points won in front of the 144 strong crowd.

Leighton’s next game is away at North-West London outfit Harefield United, who are currently twelfth. Flackwell Heath on the other hand, face Crawley Green.