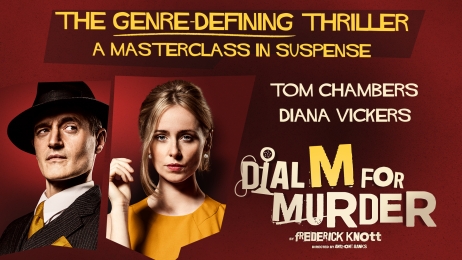 It was a gripping, edge of the seat experience to enjoy Dial M for Murder at yesterday’s opening night at MK Theatre.

For Director Anthony Banks it is exciting that live theatre is up and running:-

“That shared experience is so much better if it’s live because it’s much more visceral, whether it’s through suspense and tension or the collective release that comes from the comedic moments.”

Whilst saddened that the tour, which started in January 2020, had to be cut short, Banks kept himself busy making a short film The Gap, written by Jim Cartwright and starring Sue Johnston and Matthew Kelly, and directing a revival of the drama Herding Cats for the reopening of the Soho Theatre this May.

And he does see a silver lining in getting to revisit Dial M for Murder, noting:

“In a way it’s like doing a revival. It gives us the chance to make it even better.”

Wendice is “the ultimate charmer whose actions are all in view in all their beautiful ugliness from the beginning”.

Fans of the thriller genre will, he feels, be surprised by its unique twist.

“It’s the opposite of a whodunnit because we know who’s gonna do it from the beginning,” says the director who also had audiences on the edge of their seats with his critically-acclaimed touring production of The Girl on the Train in 2018.

“This is not a play where you can hear the characters thinking. They have the thought and they do it, and that’s really quite modern. Given the success of Tarantino’s films and Killing Eve on television, I think there’s a real appetite for this kind of storytelling.”

The instigator of the crime here is Tony Wendice, a former tennis pro who discovers his socialite wife Margot is having an affair and blackmails an old university pal into doing the dastardly deed for him.

And that’s not giving away spoilers because, as Anthony points out, Wendice is “the ultimate charmer whose actions are all in view in all their beautiful ugliness from the beginning”.

It’s about tumbling into the darkest place you could possibly imagine.”

No stranger to the genre (his other credits include Gaslight and Strangers on a Train), Banks notes that Frederick Knott’s masterpiece combines traditional thriller tropes – such as a story that hooks people so all they can focus on is ‘I wonder what happens next’ – with an exploration of social class.

“They really are rare, these plays, because what you usually get is political history or socio-economic observation or your sort-of standard whodunnit. This play takes elements from all of those and combines them in a unique way.”

Cambridge-educated Knott was a wannabe screenwriter who penned a stage play as a stepping stone into movies, except no-one would produce it. Instead Dial M for Murder was originally put on in 1952 by the BBC as a live broadcast and was such a hit with viewers that West End impresarios were suddenly knocking on his agent’s door eager to stage it.

It ran in London for a year, then went to Broadway, was translated and performed around the world, and in 1954 it was filmed by Alfred Hitchcock with Ray Milland and Grace Kelly as Wendice and Margot and Knott himself supplying the script.

Hitchcock shot it in 3-D but the process was technically glitchy and cinemagoers had grown tired of the format so, after a few half-empty screenings, it went out as a 2-D release to big box office success.

More than six decades later, and with the three dimensions of the stage at his disposal, Banks sees it as a timeless story with a juicy premise.

“It’s a bit like Macbeth in that this guy has a sniff of something that might be possible and two hours later he’s become a complete sociopath. It’s about tumbling into the darkest place you could possibly imagine.”

Another draw for the director was how Knott’s play presents a vivid picture of social class in London through its main characters: The wealthy heroine, her charming husband who has married into her money, a struggling writer who has become her lover, a working class Northern detective and the hired killer, who is a member of ‘the old boy network’ of former male-only school chums.

The 1950s-penned text doesn’t state a specific time frame so Banks has chosen to root his production in 1963.

“It feels contemporary,” he explains, “because furniture shops now are full of Sputnik lamps with balls shooting out of them, L-shaped sofas and 60s-style patterns on curtains and upholstery, plus suits and dresses have a very 60s cut.”

And he notes how it deals with very contemporary themes: The North-South divide, imbalances between men and women and disparities between haves and have-nots, with one character remarking ‘People with capital don’t realise how lucky they are’.

“We’re not going down the obvious cad root. Our take on Tony is as a friendly, warm person who is caring and honest but behind the scenes he’s working a whole load of stuff out.”

During lockdown Tom was in an online production of Apollo 13: The Dark Side of the Moon, about the USA’s thwarted mission to the moon in 1970, with his Dial M co-stars Michael Salami and Christopher Harper.

He laughs about struggling with the technical aspects of streaming a performance from home. “But I was so grateful to have a project to occupy my mind that wasn’t about homeschooling or anxiety and uncertainty.”

And he’s thrilled to be going back on the road.

“You can feel the energy in the air and it now feels more exciting and poignant than ever. Absence makes the heart grow fonder and it’s been such a long absence.”

Taking over from Sally Bretton (who did the tour last year and is now busy filming Not Going Out), Diana Vickers leapt at the chance to play Margot, saying: “I’m a massive fan of the genre so saying yes was a no-brainer for me.”

The X Factor semi-finalist turned actress and writer has done some comedy stand-up recently, as well as writing a TV series, but the last time she toured with a play was in The Entertainer in 2019. “So it’s a bit daunting. I’m excited but terrified at the same time.”

She sums up Margot as “smart and a bit of a risk-taker” who feels lonely and unseen by Tony, then she meets novelist Max Halliday. “She feels very trapped in her situation with Tony, constantly running around after him. Then she meets Max and he’s new and fresh and makes her feel alive. I think she quite likes the danger of having an affair under her husband’s nose.”

Diana notes how Margot is very much a woman of her time. “She doesn’t really have a voice. The way the inspector speaks to her is almost like: ‘Shush, woman. The boys will deal with this.’”

But times, Vickers is happy to note, are changing.

“There definitely has been progress, especially in this industry. There are a lot of female-generated or female-dominated projects and women are speaking out, whereas in Margot’s time they couldn’t.”

Best known for playing Nathan Curtis on Coronation Street and with a long line of theatre credits on his CV, Christopher Harper can’t wait to get back to live theatre.

“It’s like pinging an arrow at the start of the evening and off it goes,” says the man who, having previously worked with Anthony Banks on Strangers on a Train, is on double duty here.

In act one he’s Captain Lesgate aka Charles Swann – the old acquaintance whom Tony tracks down and manipulates into becoming a murderer.

“He’s a wonderful, slimy, dark character,” grins Harper, who in act two plays Inspector Hubbard. “Hubbard’s not your normal Poirot, comes-in-and-solves-it kind of guy. There’s something odd or rotten going on there as well.”

Harper laughs about working with Tom and Michael on Apollo 13.

“It was bonkers. We were on Swiss balls in front of green screens, in charge of our own costumes, make-up and lighting. It was a hard project to make happen but really satisfying at the end of it.”

Having also been in a two-hander called Dance at the King’s Head Theatre this summer, the actor feels there’s a renewed appetite for live productions. “I’m regularly reading stories to my little boy,” says the father of a two-year-old, “and being carried away by a tale is something that’s more and more appetising, whether it’s on television or being read to you at bedtime. “But being told a story live, in an auditorium with a group of people and the suspension of disbelief that floats in the air, is something else again. I think audiences are feeling that anew and it’s something I’m proud to be a part of.

*Fees may apply. Calls cost up to 7p per minute, plus your phone company’s access charge